Delegates and their travel companions will find so many ways to enjoy their leisure time before and after the conference. These include golfing, spa treatment, half and full day tours of Ayutthaya and Bangkok as well as a few days at a beach or hill resort or journeys further afield into Indo-China. Here are some of the highlights.

THE CITY OF AYUTTHAYA
Ayutthaya served as the capital of Thailand, then known as the Kingdom of Ayuthaya, for 417 years from 1350 to 1767. The ancient capital is 30 miles north of Bangkok, declared a World Heritage Site by UNESCO. The city will enlighten cultural buffs with the historical ruins and please sightseers with the ‘real Thailand’ scenery. The highlight attractions include: 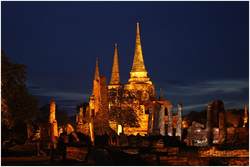 Built at the beginning of the Kingdom of Ayutthaya in 1491, Wat Phra Si Sanphet was the only temple located inside the compound of the Grand Palace, without resident monks—which is the original idea when King Chakri built the Temple of the Emerald Buddha, a no-monk royal temple in the Grand Palace in Bangkok. During the glory days of Ayutthaya Kingdom, this was the largest temple in the city. Ashes of some Ayutthaya kings were stored here. It was damaged and left abandoned after the collapse of Ayutthaya kingdom but the remaining structures still help us picture the temple at its former condition. 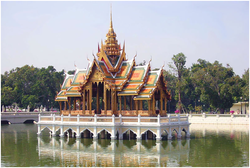 The palace was originally built in 1632 during the Kingdom of Ayutthaya. However, it was deserted for over 80 years after the capital was established in Bangkok. King Rama IV renovated the old palace compound, and King Rama V constructed a new royal palace in 1872. 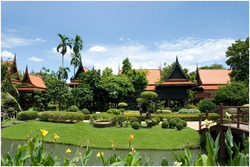 Located on the left bank of the Chao Phraya River in Tambon Bueng Yai, Amphoe Bang Sai. Farmers from Ayutthaya as well as from other provinces undergo training in folk arts and crafts here. At this center, you will have a glimpes of how farmers in the four regions of Thailand live and work ; how their products of arts and crafts are produced. The center is under the Promotion of Supplementary Occupations and Related Techniques (SUPPORT) which was established under Royal Patronage on the 21st July, 1976.
Source: SuthinSoonthorn 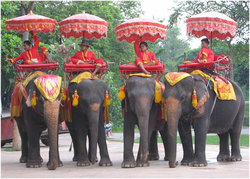 Situated in the north of the Ayutthaya Historical Park, the pavilion was served as a royal seat for the monarchs to witness the elephant round up. Elephants were the essential animals for wars and transports in the past, and there were a round up ritual gathering wild animals to be trained for wars and transportation. No longer carried on, the last time the round up was taking place was in 1890 to welcome Nicholas II of Russia during his visit to Siam.
AROUND BANGKOK
More than anywhere else in the country, Bangkok expresses Thailand’s special ability to blend the old with the new. This lends a thrilling sense of discovery to sightseeing and adds an element of surprise when exploring this most fabled city of the Orient. Bangkok is unrivalled on shopping, dining and entertainment and is indeed the most suitable destination to host your conference.

Grand Palace and Emerald Buddha Temple
Definitely a must see for all visitors. The stunning compound, with the beautiful and impressive structures unique to Thailand, reflects the pillars of Thai society, namely the Monarchy and Buddhism.

Chao Phraya River and the Klongs (canals)
Bangkok’s former reputation as Venice of the East can still be witnessed with a trip along Thailand’s most important lifeline and into the klongs (canals). A visit to Wat Arun or the Temple of Dawn is a suitable ending of the tour.

Damnoen Saduak Floating Market
80 miles west of Bangkok is the unique site where age old lifestyle is depicted with farmers in tiny rowing boats trading and bartering produce freshly picked from nearby orchards and farms. 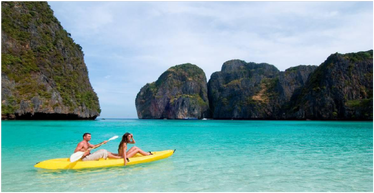 Beaches and Islands
Matching Thailand’s cultural and historical attractions is the 2,500 kilometres of coastline, generously provided with sandy beaches, sheltered bays, quiet coves and idyllic islands. Around Thailand’s shores are a geographic variety and an enormous diversity in the styles of seaside vacations. The tropical climate and year-round sunshine is typical of Thailand’s beach resorts. A two-hour drive southeast of Bangkok is Pattaya, colourful, vibrant and Thailand’s most developed resort. Across the gulf, the twin resorts of Hua Hin-Cha Am offer a quieter and more restful enjoyment of sun, sea and sand. More spectacular beaches are in the far south, most notably Phuket, off the southwest coast and an hour’s flight from Bangkok, with breathtaking tropical scenery, unspoiled beaches and clear blue water of the Andaman Sea. Off the opposite shores of the peninsula in the Gulf of Siam and also a little over an hour’s flight from Bangkok is Samui, an island paradise which has also established a firm status as a very popular year round beach holiday destination.

Northeast
Thailand boasts civilizations dating back to prehistoric times. Prior to the Thai’s rise to supremacy in the 13th century, much of the region was dominated by the Khmer whose vast empire was centered on Angkor in present-day Cambodia. The cultural legacy of this influence can be seen at a number of well-preserved Khmer monuments, notably in Buriram and Korat, which are the finest examples of their kind outside Cambodia. 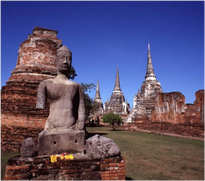 Our Ancient Capitals
Reflecting past glories to the fullest are the surviving ruins of the first two capital cities, Sukhothai and Ayutthaya which ruled prosperous kingdoms during their eras. At both places which have been designated World Heritage Sites by UNESCO, the former located on the northern edge of the Central Plains and the latter some 80 kilometres north of Bangkok, are impressive ruins attesting to the architectural achievement of the Thai. In addition to these most impressive sites, there are many more in other parts of the country and are best discovered by an overland trip. 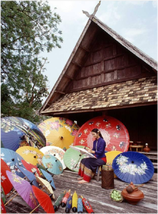 Angkor Wat, Cambodia
Siem Reap, the home of Angkor Wat, one of the seven wonders and a UNESCO-designated World Heritage site, is only an hour away from Bangkok by plane. There are three daily flights from Bangkok to Siem Reap. 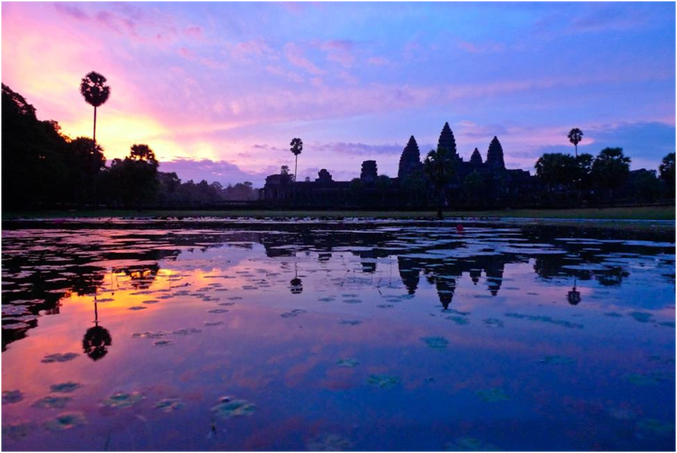 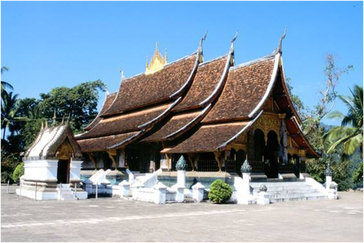